I dance …..to experience that romance of movement-….to reach the pinnacle of intoxication where realisation fails me, if I am dancing or dance is moving me

An intense yet a calm approach along with a strong masculine style marks Vaibhav’s Bharatanatyam.

As a leading dancer of the Nalanda troupe, he has performed across India and abroad. Dr. Kanak Rele’s dance productions like Santavani, Shilappadikaram, Kalyani, Kanchan Mrig, Svapna Vasavadatta, Prateek have featured Vaibhav as the male lead.

Vaibhav is prominently featured in dance-video’s produced by Nalanda such as ‘Learning Bharat Natyam’, ‘Nritya Bodh I & II’, ‘Nritya Bharati – an internationally acclaimed dance film’. Vaibhav has himself produced, choreographed and performed in ‘Nritya Prabha’. 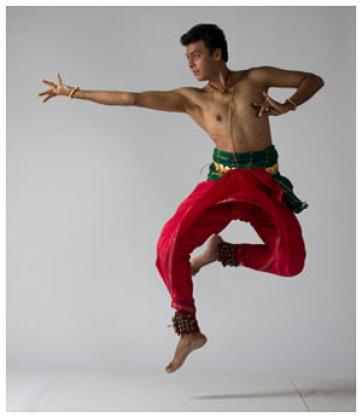